Went shoppin' yesterday--finally purchased Gyakuten Kenji Ace Attorney Investigations: Miles Edgeworth (still can't get used to that title ._.) AND Bayonetta. *0* I had lots of fun breakdancing I mean I mean um killing angels in Bayonetta and am currently investigatin' stuff as Edgey. But I also went into Kinokuniya yesterday and in the children's section found... Professor Layton novels! Which of course I had known about but didn't realise were quite so very long ;0; so of course I didn't get them, no way I can read that stuff... though I did enjoy looking at them, I really like the way the covers look and stuff. Very classy. There were two different hardcovers, one blue and one red.

Just as I was going to leave, though, I spotted another PL book! Oh Professor Layton, you are stealing all the money Yu-Gi-Oh never managed to drag outta me on account of having much classier merchandise :x aggh. In other words, I gave in and bought more PL stuff. e_e

what do you mean this isn't what webcams are for

It's a really cute little booklet that covers the plots of all the games and the movie, along with lots of character profiles and really really nice screenshots because they are nice quality straight from the vids rather than from the games. :3 Awesome!

... Mostly I bought it because it came with stickers, though. Ahahaha! Heh. Um.

May scan this thing properly when I have time.

I've been waiting for my roommate to come back from the hospital for days now! Where is she? Saturday before last she said she'd be back Monday, or at least the Monday after that. Monday and Monday have come and gone already. Latest return date was today... it's nearly 10pm already! It's so quiet and lonely here... and I haven't left my room all day because I'm expecting her back. I'm worried... :|

In other news: ugh I think I dropped my mouse way too many times it's really really glitching up all the time now, this is super-duper frustrating.

EDIT: though on the other hand I can read doujinshi in peace or something, ufufu

EDIT EDIT: She finally came back! the second I left to get food arrrrgh

Really tired right now, for whatever reason... can't go to sleep yet, though, since I still have homework to do. :|

Wish I didn't have it because urggggghh so bored of it, but... gotta do something, yeah? I've been lollygagging on this assignment enough already, I suppose. *sigh*

To unwind I did some sketches in opencanvas... after like a billion terrible drawings, I managed something I'm kinda happy with!

Just a random boy. The anatomy seems weird, but that's because I just drew it straight out rather than planning anything. Not how I usually go, but it was actually pretty relaxing.

I may revisit this some other time, but I really oughta get back to work now. :|

LOOK AT WHAT MY PARENTS GOT ME!

And yes that is a Pocket Monsters shirt, thanks for asking 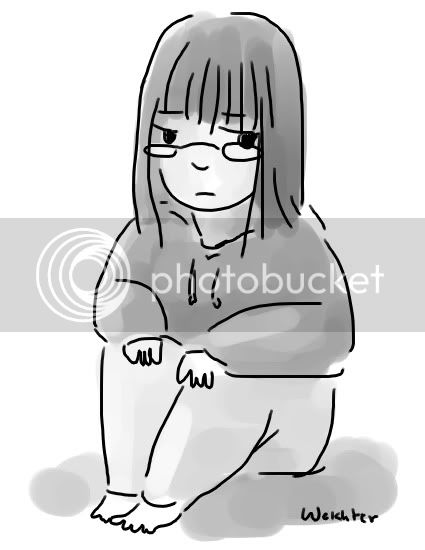 Not feeling so great right now. Couldn't sleep at all last night. Now my legs are shaking... I'm kinda... exhausted...

I have a bunch of work to do right now, but look who arrived in the mail! *0*

For pretty much the billionth time I wish they'd either a) make Luke merchandise smaller, or b) Professor merchandise bigger so that their comparative heights make sense, but... oh well. I guess Luke is just doomed to having his oversized head looking even more oversized than it really is! Ahaha check out the noggin on that kid! What a nerd!

More on this and other Layton moichendice I've acquired recently after I do my homework, derp.

How do I get paper towel out of my refrigerator? It's encrusted onto the glass of the shelf and it's kinda super gross. I can't quite figure out how to get it off... I want more shelf space to keep my green tea-flavored soymilk. :|

IF IT HELPS, I'm pretty sure it's stuck on with sweetened pickling vinegar? I dunno. It's a little upsetting because I can't remove the shelf from the fridge (it's attached, ugh) otherwise I'd just give it a good scrubbin', which I've done before.

In other new, man oh man Hamtaro's Ham-Ham Heartbreak is the cutest game ever. *0*

Would you believe I actually had rips of all the hamchat sprites in this game like 7 years ago and didn't even know it? Agh I want them all again now even if they were the mega-Q versions but I can't find 'em bluhoo

I won't chukchuk though! One day I'll get them and it'll be so hamtast

Roommate just went back to the hospital again.

Last night I had pasta and meatballs for dinner! It was delicious!

But then since my roommate hit her head pretty hard and got a concussion I went with her to the hospital. Being in the emergency room was eerily like those weird medical shows they have at 2am on the Discovery Health channel. Unfortunately, just like on those medical shows, the doctor wanted a lumbar puncture after the CT scan came back clear. Eek.

Luckily the LP went fine... thanks to the anesthetic she said she didn't feel a thing, so that's good. Although I hung out by her bed most of the night, I went to the waiting room during the LP. I caught part of a weird movie on SyFy about, I dunno, people with octopus arms or something. One gave a guy a swirly. It didn't make much sense.

Actually, I don't think I make much sense right now. I'm kinda tired. We didn't get back until 6am. Maybe I'll go back to sleep...

(You have to release the pressure when it's brewing)

Currently, 4 bottles of celery seed/lemon soda -- the kind that spilled everywhere -- and 8 bottles of ginger/lime soda.